After more than a decade of a class action lawsuit, Knight and Swift have agreed to settle a lawsuit involving 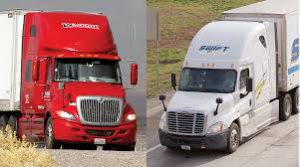 According to transportationattorneys.net the $100 million dollar settlement had already been fully reserved and is not expected to impact future financial results.

The lawsuit started in 2009 before Knight and Swift merged. The lawsuit was primarily the result of drivers who were lease purchasing trucks being treated like employees as opposed to independent contractors.

The drivers claimed that Swift unlawfully deducted things like fuel, lease payments, insurance and other items from the driver’s settlements. Part of the complaint also stated that the drivers were paid less than the Federal Minimum wage based on the amount of compensation they took home and the hours worked which can be substantial for a truck driver. Depending on circumstances, drivers might work up to 70 hours per week.

Part of the reason the driver’s attorneys argued that the drivers were actually employees was because Swift could terminate the lease for any reason and demand all the lease payments were made despite the termination of the lease.

Ultimately, Swift must have realized they were not going to win the case and they agreed upon the settlement.

Ultimately, the result of this settlement not only calls into question the long term viability of the independent contractor model it also exposes major problems with trucking companies arbitration and lease purchase programs.

What does this mean to trucking companies?

One is if they operate in states like California they may have to consider using a different model or pulling out of the state.

Companies using lease purchases to grow their fleet and create independent contractors are going to have to rethink their lease purchase programs or at the very least not do them in states that are not supportive of the model.

What does it mean for independent contractors?

Long term it may mean that the model begins to go away as it has in California. This means less small

businesses (this is what independent contractors are) in the industry. I think this is bad for not only the trucking industry but also bad for drivers who want to start their own companies. Our country was built on small businesses, it would be sad for any opportunity like this to go away.

It will mean less options for potential contractors to purchase trucks, especially if they have bad or no credit. Trucking companies are motivated to provide lease purchase options for drivers who want to become an independent contractor, dealerships are not as motivated.

Owner operators might be a dying breed, and we may be witnessing their downfall even now. Will the trucking industry be better off without the Owner Operator?

The government seems to think so.